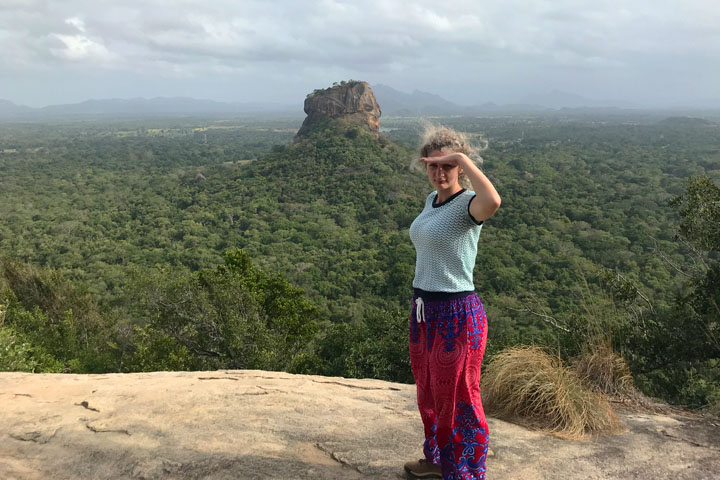 An off the beaten track guide to hiking in Sigiriya

One of the highlights of my holiday to Sri Lanka was hiking around the legendary Sigiriya Rock. Also known as the Lion Rock, Sigiriya is an ancient rock fortress that was built by King Kashyapa during his reign from 477 to 495 AD. However I did not follow the usual tourist path and walk up Sigiriya Rock itself, which is expensive and crowded. Instead I did some other hiking in Sigiriya area during which I appreciated more magnificent views of the rock fortress and surrounding countryside.

The best hike we did in Sigiriya was quite by mistake. We wanted to visit the Mapagala Fortress, which formed part of the Anuradhapura Kingdom pre-dating the erection of Sigiriya Rock. We went to the intersection of Inamaluwa and Sigiriya Road (coordinates 7°57’03.9”N 80°45’27.9”E) but nothing was there. So we asked a nearby local sitting at the side of the road if he knew where the place was. He offered to take us there for a small fee. Now I don’t think we actually went to Mapagala Fortress but the old man took us on an interesting climb. We crossed the road and made our way through dense bushes and scrub for some minutes before coming to a steep rock face. The climb was very steep and difficult

From here on out it was tough climbing up steep and jagged rocks until there was no more left to climb. Upon reaching the top, we were awed by an incredible view of Sigiriya Rock surrounded by undisturbed nature. A beautiful breeze was blowing and our view was framed by leafy greens and wild flowers. The best view of Sigiriya Rock with no other tourists!

We turned around to see an expansive plain with more spectacular views of the countryside. There was not another soul in sight and our guide informed us that this undiscovered nook is perfect for camping. We stopped to appreciate gorgeous views of the valley

Pidurangala Rock sits adjacent to Sigiriya Rock and is a popular place for watching the sunrise and sunset because of its 360° views of the valley as well as Sigiriya Rock. There is a small entrance fee to pay before you start your ascent. Near the beginning of the walk is the humble Pidurangala Buddhist Monastery. Pidurangala Buddhist Monastery at the beginning of the hike

Pidurangala was used a monastery from as early as the first or second century BC before becoming a prominent Buddhist Monastery during King Kashyapa’s time. If you’d like to enter the monastery you will need to take off your shoes and dress modestly. Outside is the beautiful Samadhi Buddha state. A statue of the Samadhi Buddha at Pidurangala

Take the steps and veer left of the monastery to carry on towards the top. Around the halfway point you will reach a complex of caves with a giant statue of a reclining Buddha overlooking views of the valley. The origins of the statue date back to the King Kashyapa era, when it was originally made of clay and lime. Nowadays the statue has been partially reconstructed with modern bricks. It is important to follow Buddhist etiquette and not turn your back to the statue for photographs. Be respectful at Buddhist sites and follow the rules

A rather cute feature of these caves are the piles of rocks people have made. Local visitors add to these piles of rocks in the hopes of receiving good luck as well as happiness. Stacks of rocks on the walk up Pidurangala Rock

Now for the hard part. This part of the hike involves less smooth paths and navigating a lot of jagged rocks. Use your hands to grip tightly until you reach the top. The incredible views that you are met with are well worth it! Hiking to the top of Pidurangala Rock is difficult A stunning view of Sigiriya Rock from Pidurangala

Whilst you’re hiking in Sigiriya…

As well as hiking in Sigiriya, there are some other places of historical and cultural significance you should also visit during your trip.

This Buddhist temple next to Pidurangala is revered for its beautiful statue of the Buddha sitting under a cobra. According to the fable, Buddha had sat under a Bodhi tree to meditate deeply. After four weeks of meditation it began to rain heavily. A cobra named Mucilanda emerged from the ground and protected Buddha from the rain with his hood. For this reason, cobras are considered a source of protection to Buddhists. Opposite the statue of Buddha is a giant white stupa. A stupa is a bell-shaped dome where valuables are held, kind of like a Buddhist safe. It is said that this stupa was once filled with all the sapphires, rubies and other precious gems owned by the King Kashyapa. Today it probably doesn’t hold much but serves as a place of meditation for the monks that live at this temple. This Buddhist Stupa was once filled with gem stones and riches

The Ramakele Stupa is the biggest stupa in the Sigiriya area with a diameter of 28 meters. It is unknown whether it was built by King Kasyapa or King Mugalan but in any case it is very, very old! The relic chamber of this stupa is uniquely built with three compartments. The bottom compartment houses a stone replica of Mount Meru, which lies in the Garhwal Himalayas and is of significance to Buddhists. A replica of this carving can be seen at the National Museum in Colombo. Probably this stupa contained a lot of jewels and riches once upon a time, however it was pillaged by treasure hungers long ago and is now empty. Ramakele Stupa is of historical significance

Avoid the temptation of visiting the restaurants that boast the best views of Sigiriya Rock and experience local food at a family run restaurant. We enjoyed a delicious home cooked meal at the Gamagedara Village Food. The place is small and rustic, with a husband and wife team preparing the food from scratch. We ordered vegetable roti, which was fried bread stuffed with seasoned vegetable, as well as fish curry and koththu. If you want to know more about eating Sri Lankan food read my previous blog. Hiking in Sigiriya was one of the highlights of my holiday to Sri Lanka. I hope my photos serve as both an inspiration and helpful guide!