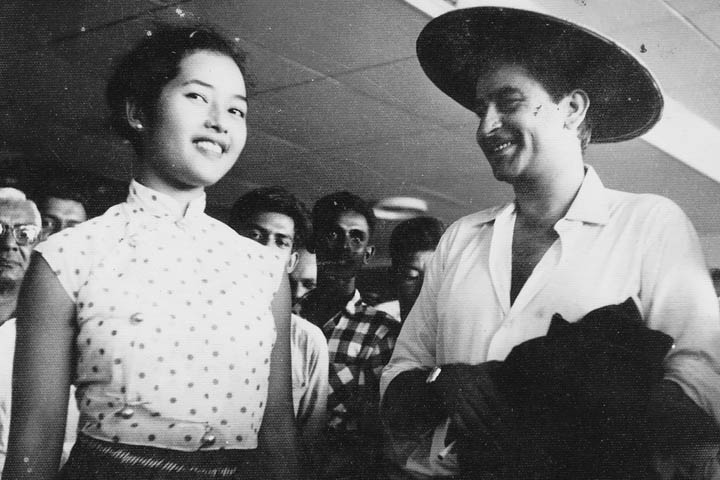 Recommended Reading: Stories from the East

Staying at home is a good excuse to catch up on some reading. And NOT Facebook reading – in times like these, we all need a break from the social media monster. Personally, I believe nothing is more soothing than curling up with a riveting novel and a cup of hot coffee.

Lately, I’ve been reading books by Asian authors following the Singapore Writer’s Festival and the George Town Literary Festival. There is so much budding talent from this part of the world. It is also refreshing to read histories and stories told from a non-European perspective. Here are some of my top reading picks.

Miss Burma (2017) by Charmaine Tan is a sad love story set during a period of extreme turbulence and upheaval in Burma. The outbreak of WW2 and Japanese occupation, followed by the rise of nationalism and civil war, form the backdrop. The main characters are Benny, a Jewish Indian, and Khin, part of the long-persecuted ethnic minority group, the Karen.

Miss Burma is brutal, honest and beautiful in its vivid descriptions of the humid countryside and retelling of historic events. You will feel you are living each painful moment and experiencing every small triumphant together with the battered characters. The book is inspired by Charmaine Tan’s grandmother. It provides an intimate retelling of a time in South East Asian history that has been little reported on in global media.

The title, Miss Burma, refers to Tan’s mother who was crowned Miss Burma in 1956. This gripping book is difficult to put down until you have reached the very last page!

The Paper Menagerie and Other Stories

The Paper Menagerie and Other Stories (2016) by Kevin Liu is a collection of short stories that examine human values, and how our values are shaped by our cultural upbringing. In some stories, Liu questions how human consciousness will evolve in the future. The stories are told from a definitely Asian point of view. The protagonists are Chinese and Japanese, and there is a strong futuristic element.

I found this collection deeply thought-provoking and philosophical, but there is also an element of the whimsical. For instance, the title story, ‘The Paper Menagerie,’ tells of an ungrateful little brat who is mean to his mother. His mother escaped the cultural revolution in China to emigrate to America and loves her son dearly. Yet he cannot get over the fact that she speaks English with an accent. He just wants to fit in with his American friends. The mother tries to build a bridge through the Chinese art of paper folding. Her folded animals are special, and they come to life! I won’t ruin the ending but this particular story left a deep impression on me.

Likewise, the ultimate story in the collection, ‘The Man Who Ended History: A Documentary’ recounts the tragedy of Unit 731. This was a real-life Japanese labour camp during WW2 located in the northern Chinese province of Heilongjiang. In the story, a special time machine is invented that allows historians to go back and witness past events. The goal is to remove bias from history, ascertain the truth, and justly persecute war criminals. Unfortunately, using the time machine creates more problems than it solves.

Liu’s stories are highly imaginative and will leave you wondering about the meaning of life.

The Heartsick Diaspora and Other Stories

The Heartsick Diaspora and Other Stories (2020) by Elaine Chiew is a collection of stories that explore what it means to be Asian when you live abroad. Many of the stories are set in the United States or the U.K. and are told from a Malaysian or Singaporean perspective. It is no wonder because the author herself knows exactly what it means to be part of the diaspora! I had the pleasure of meeting Chiew in person. She grew up in Malaysia, studied in the U.S. and worked as a securities lawyer in both the U.S. and the U.K. for many years, before becoming a writer and settling down in Singapore – wow, that is a mouthful! However, you do not need to be Asian to relate to her tales. Anyone who has ever lived abroad, struggled with their identity, or felt a longing for home will enjoy her collection.

Chiew has a talent for creating interesting and dynamic characters that come to life in a matter of sentences. It is hard for me to pick my favourite story in the collection. I’m a sucker for sob-stories, so I’ll probably go with the final tale called, ‘Mapping Three Lives Through a Red Rooster Chamber Pot’. Chiew spins a multi-generational yarn starting from the point of view of Min Fong, a samsui woman in 1930s Singapore. While I had seen colourful photos of samsui woman in various souvenir shops in China Town before (they are memorable due to a red headscarf they wear), I never really appreciated their history or plight. Many of them came from rural China and worked as hard-labourers in Singapore. The tale was a real eye-opener for me.

I would also like to call out Chiew’s wonderful descriptions of Asian food. Food is an important and binding element of Chinese culture. Her evocative descriptions of regular fare throughout all the stories add a vivid dimension. She even describes when the food is not that appetising! These lines from ‘The Coffin Maker’ are magnificent: ‘he slurped the noodles in gulps, his distress dripping into the soup. The noodles were hard and chewy, the broth bland and thin. Still, it was the most delicious thing he’d eaten in a year.’

Ministry of Moral Panic Stories (2013) by Amanda Lee Koe is yet another collection of short stories. This is where my recent journey with short story collections began, in fact. Apart from Chekov, I’ve never been one for flash fiction, preferring long War and Peace-esque sagas. However, Amanda Lee Koe is celebrated as one of Singapore’s finest exports. Since I live here, I was keen to read some of her work. I’m glad I did, as I found this book completely addictive reading, and emotionally rewarding.

Koe has a special way of finding life-lessons in everyday events. She delivers these philosophies in a style much akin to Chekov and not so morally guided as Wilde. Her characters come from all walks of life and are heartfelt, three-dimensional and real. You have to appreciate Koe for her powers of observation and empathy, as she puts herself in other’s shoes.

My favourite story is ‘Pawn’, which begins with the passage:

‘Delia was the sort of woman you took one look at and instantly knew she’d never once been touched by a man. Perhaps it was in her gait, the slight, awkward twitch of her philtrum before she smiled, or the exact angle at which she tucked her purse under her arm as she headed out for lunch each day. She smelled lightly of mothballs, though there were no mothballs in her wardrobe.’

Delia is taken advantage of by a poor, young lad who works at one of the food stalls near her work. The end of the story will leave you furious!

Penance (2012) by Kanae Minato is a Japanese thriller, written from the perspectives of four young girls who witnessed a murder. The book is what I would class ‘an easy read’, not too much metaphor and lots of dialogue. Although there is a grisly murder, it is not a traditional mystery either. There are not enough breadcrumbs at the beginning for you to piece together the puzzle until you reach the very end. Nonetheless, it is a real page-turner! I blasted through this book in just two days as I was obsessed with finding out what happened next.

What I love most about Penance are the magical descriptions of growing up in rural Japan. The girls are obsessed with French Doll displays (which really are a thing), the households keep their doors unlocked, and the sound of Greensleeves rings out every evening at 6pm to signify curfew. What a different world!

Difficult Daughters (2010) by Manju Kapur is an easy and thoroughly enjoyable read with lots of colour and chaos between its pages. It is one of the first fiction books I have read by an Indian author. Kapur grew up in New Dehli and is an English Literature teacher at the Delhi University. This is her first book which won the Commonwealth Prize for First Novels (Eurasian section).

As the title may suggest, this book looks at the conflict between generations – most prominently, from the point of view of a difficult daughter! Virmati falls in love with her neighbour who is an older and married man. She defies her family and eventually moves in with him. You can only imagine the heartache, drama and grief that ensue. Not only are the characters lively, but I also enjoyed reading the exotic names, rich descriptions, and learning more about the cultural norms and traditions of an upper-class Indian family.

The Orphan Master’s Son (2012) is more of an honourable mention, as the author is not Asian. However, the book is set in North Korea and writer Adam Johnson is a historian of Asian Civilization. I’ve always been fascinated by the hermit kingdom and this book is one of my all-time favourites. You can read my full study of the text on a prior blog I wrote here.

This book is a well-researched fiction that reads like a documentary and is broken into two books. Book one looks at day-to-day life for a worker of the State in North Korea. It explores the so-called kidnapping of foreigners by DPRK boats and describes living conditions out in the countryside. The second part of the book is set inside a labour camp. At times the plot is a little fantastical, but the diabolical details and heightened emotions – including a haunting description of extreme starvation – will leave you gasping.

Next up, I look forward to some more serious reading when I dig into Mao: The Real Story (2012) by Alexander V. Pantsov and Steven I. Levine. I remember studying the cultural revolution back in university and have always been curious to learn more about this dominant figurehead of Chinese history.

Happy reading and feel free to drop any other literary recommendations in the comments box below.