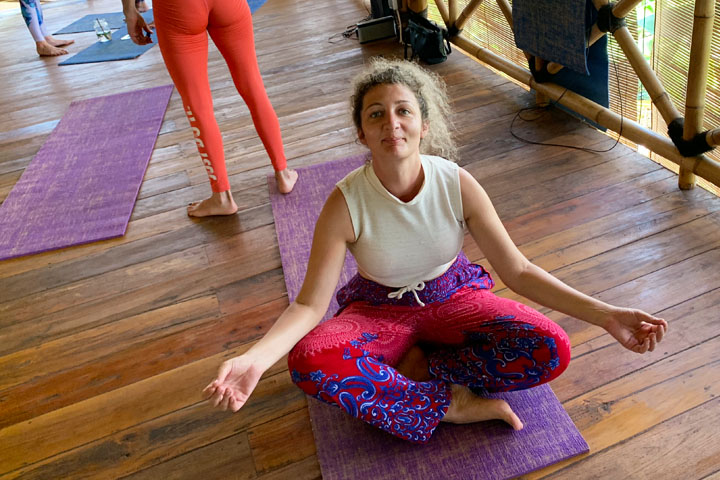 Why are yoga classes always taught by skinny white women – even in the middle of Asia? I pondered the question as a slender Australian women with spectacular flowing hair strutted into the yoga studio, right to the very front of the class. I could tell she was Australian by her accent. She quickly announced to everyone in her Aussie twang that the class might start a little late as there was a bit of a “ka-fuffle” going on with the audio system.

She said “Technology is not my best friend, we’re just trying to get the speakers to work.” But then very quickly corrected herself by adding “I’m sorry, I love technology. That was a bad thing to say.” After a few more minutes, the new speaker set started working. “See guys, because I positively owned my relationship with technology, I was able to get it working.” Noice.

I later asked my Asian friend for his view on why yogis are inevitably white women although the yoga practice was born in the East. He responded that yoga classes target “white ladies” and that “white ladies” like to be taught by “white ladies”. Those were his words, not mine. A simple but interesting observation. Well, I was there after all. I was the one sitting in the yoga studio of Flowers & Fire at Gili Air, paying a healthy $12 a pop per yoga lesson to make me feel more… organic? I guess it is because that’s what us white women like to do. We like to travel somewhere really Eastern, but with modern conveniences, to do yoga.

Quite honestly, after we got over the technology hurdle, our bubbly Aussie yogi gave the best introduction to a yoga class that I’ve ever experienced. Instead of diving right in, she gave us a brief ten-minute history on the origins of our planet. She took us through the big bang theory – the explosion of the super nova – and how we went from only one element (iron), to an entire periodic table. She made us feel empowered by declaring “You all have a VIP seat to the periodic table, simply by being in your own bodies”. She then did the impossible…. she twisted all of her long, wavy hair up into a bun without even using a hair tie! Then we got started with our practice.

A yoga session is called a “practice” not a “work-out” because it’s not just about doing exercise. It’s about regulating your breathing, clearing out your mind, and finding liberation. Liberation is of course open to interpretation, however the Buddhist version is probably the most compelling. Liberation is to be free of the never-ending and pointless pursuit of ephemeral feelings. By closely observing your thoughts and body in the present moment, your mind can become clear, relaxed and satisfied.

I like to think of myself as a semi-retired yogi. I used to be really into yoga when I was living in London. I broke my back in 2011 and it become imperative to focus on exercise that would improve my flexibility and strengthen both my core and my mind! However when I moved to Singapore two years ago, I gave up my practice. In London I used to love walking in from the cranky, grey weather into a cool studio and get warmed up with a few downward facing dogs. In Singapore, the weather is so hot and humid and almost all of the studios rely on fans rather than air-conditioning. I find it very difficult to enjoy yoga in the heat. However, the weather on Gili Air in May is just fine for yoga. It’s warm but breezy with very little humidity.

Flowers & Fire is the most popular yoga studio on Gili Air. The premises are beautiful, hidden away in a nook off the main road; an abundance of greenery and flowers shrouding a small dipping pool. It is just like a secret garden. To get to the yoga studio, you need to clamber up a slightly scary, twisty set of bamboo stairs. The studio is constructed entirely from bamboo and is luxuriously spacious with powerful ceiling fans running at full blast and a surround-sound audio system. The bamboo studio at Flowers & Fire I attended the Monday morning class, which is suitable for beginners. As a semi-retired yogi, I didn’t want to overdo it! The class was 90 minutes long and took a relaxed pace. Although my Utthita Parsvakonasana (extended side angle pose) was a little shaky, overall I think I did quite well and the lesson was really enjoyable. The Game of Thrones style of music humming through the speakers made it extra special – well worth the ka-fuffle at the beginning! I also had an “ah ha” moment during the class, when the yoga instructor started talking about “sitting bones”. I can’t recall exactly what she said about them, but it reminded me of a yoga instructor I followed back in London who spoke with a lisp. She was always going on about “sipping bones” or “hissing bones” or some sort of “bones”, and I could never understand what she was going on about. It dawned on me then that she must have been talking about sitting bones.

At Flowers & Fire they run classes every day. Checkout out their time table here. I’d definitely recommend a visit to make your trip to Gili Air extra special.