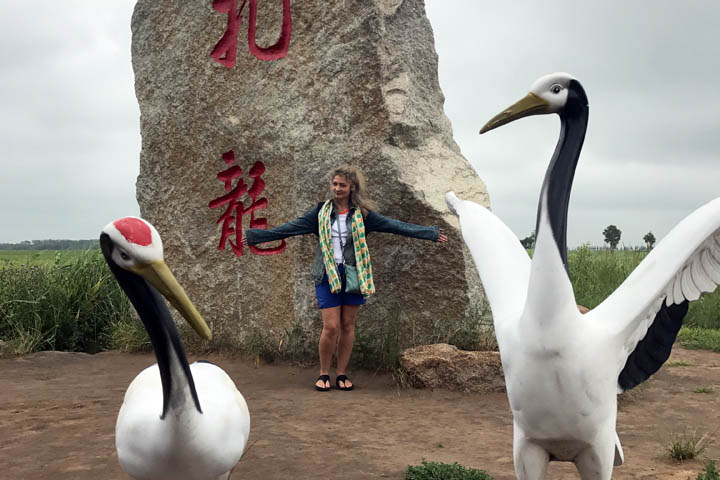 Not many people associate China with the great outdoors however the Heilongjiang province is a nature lovers best kept secret and one of the few places you can witness the endangered red crowned cranes. From free mineral water springs and volcanic walks in the Wudalianchi Park, to the beautiful Zhalong Nature Reserve, there are many unspoilt delights that makes a visit to Heilongjiang very special.

One of the highlights of my last trip to China was a drive to see the famous Zhalong Nature Reserve in Qiqihar, the second largest city Heilongjiang. This place is a bird watching heaven and although I don’t really like birds, the visit was well worth the four hour drive from Harbin. Here you can observe the rare and endangered Red Crowned Cranes, which are held in high regard by the Chinese and are only second to the Panda, which is China’s National Treasure. Legend has it that the ancient Chinese Emperors would keep Red Crown Cranes as pets and if they ever needed to punish a traitor, they would use the red crown to mix up a terrible poison that would cause a painful death. A close up of the endangered red crown crane On the mini bus entering the Zhalong Nature reserve

The endangered Red Crowned Cranes are looked after in cages and are only allowed to roam free during feeding time, which occurs at 10am, 12pm and 2pm. It is critical that you time your visit to coincide with feeding as this will be the only opportunity to see them take flight, although wealthy visitors can also pay for additional feeding times. We arrived just shortly before 12pm and after purchasing our entry tickets, we jumped on a mini bus that took us deep inside the reserve. We then made a mad dash through the tall weeds and marsh to get to the lake where the birds are fed. There were masses of Chinese tourists queued up here and we got there just in time to squeeze ourselves through the crowds and get as close as possible to the lakeside to wait for that moment when the birds would take flight. The endangered red crown cranes take flight together in harmony

I took photo after photo in my quest to do justice to these graceful birds and get that one perfect shot where their wings were spread, head arched, and they were flying in unison against the moody sky. I think I got a few cool shots out of hundreds of duds. Some cranes were more energetic and frisky than others A crane flaps its wings ad it prepares to take flight After the feeding spectacle, the birds were rounded up and taken back to their cages. We spent some time walking around the park and I stumbled upon an interesting scene of two women dancing in respect to the birds. They were not so graceful but I decided to take a video of this scene as it was memorable.

In these parts of China there are not many Western faces to be seen and so it was very common that people would stop me during my holiday and ask to take my photo. I was happy to accommodate such requests as the people were humble and nice about asking (or at least gesturing, because they cannot speak English). But as I was taking the video of the women dancing amid the reeds and the birds, I was really pissed off when two Chinese guys grabbed my arm and insisted on taking my photograph. Because of them, my video footage was rudely interrupted and they did not seem to care.

One of the unusual features of the Zhalong Nature Reserve is the giant egg that sits in the middle of the park. It looks like a real egg, with its perfectly smooth oval shape and off-white colour. I was burning with curiosity to know what it was. The egg was strictly guarded with steeped grass walls and locked doors so visitors could not enter and it looked mysterious. I later learned that the egg is where the cranes are housed during winter, which can get as cold as -30C. For easy directions to visit the Zhalong Nature Reserve on your own (although I strongly recommend to visit as part of a tour) visit Zoe’s blog, Over the Horizon. A visit to North East China is an amazing experience with many things to see, do and eat. However witnessing the endangered red crowned cranes take flight was an experience I will never forget!