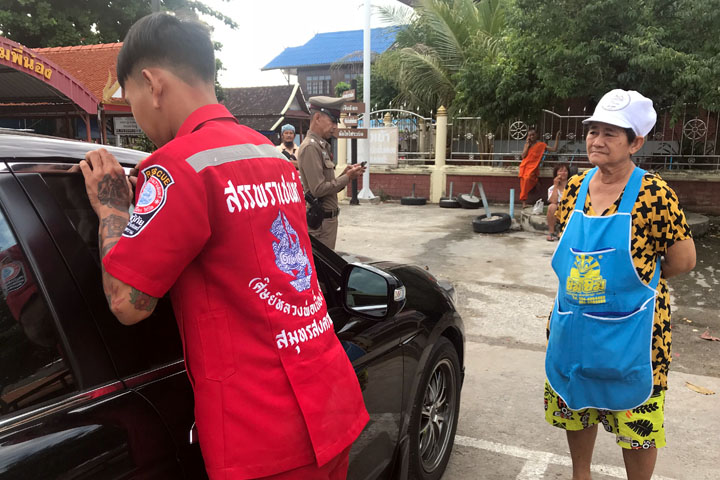 What do you do when you lock your keys in the car? This happened to me recently during a weekend in Bangkok. I had driven outside of the city with a group of friends and we were having a fabulous time browsing the fresh produce and buying all sorts of traditional handcrafts and foods at the Bagnoi Floating Market. We went back to the car to load up our purchases in the trunk and after closing the trunk lid we immediately realised our error… we had locked our keys in the car!!

It was like it happened in slow motion because we realised our mistake instantly. Naturally our first reaction was to look up YouTube videos on how to open a car without keys. There was a Buddhist temple nearby and the monks generously lent us strips of metal to slide down the inside of the window in an attempt to pop the lock. However it wasn’t long before a policeman strolled by looking equally concerned and amused at our activities. A friendly Thai police officer helped us brainstorm what to do

The policeman, who bore an uncanny resemblance to former US President Obama, helped us to make a few phone calls for expert assistance in the area. After 20 minutes an ambulance came to the rescue! There were three emergency workers in the ambulance who took charge of the situation. They opened up their vehicle and got together their “tools” for the mission, which included a small wooden wedge and a very long metal wire. An ambulance arrived on the scene and emergency workers helped us Whilst one of the emergency workers used the wooden wedge to open up the car window seal, another worker inserted the long metal wire with a hooked end through the top of the window and into the car on the drivers side. He then tried to manoeuvre the metal hook to unlock the vehicle. The other workers assisted him by looking inside the window of the car and calling out directions. Emergency workers inserted a long metal wire inside the car Our plight attracted a lot of attention and all the market sellers, local monks and passersby came over to see what we were doing. Most of them could not understand how we managed to lock the keys in the car in the first place. Curious spectators gathered around us and took photos

After 60 minutes of fumbling around with the metal wire the emergency workers achieved the impossible!! They used the hooked end to pull the clasp under the driving wheel which prompted the trunk to open. Everyone, including the spectators, cheered at the achievement and even the policeman insisted on having his photo taken with the emergency workers. It turned out to be a jubilant end to a stressful situation. A successful operation to open the trunk without keys!

When you lock your keys in the car it is never smart and if it happens, your first reaction is usually to kick yourself in the head. However now I have seen the experts at work in solving the situation I feel confident I would know what to do should it happen to me again. I made a short video of how the situation unfolded. Please feel free to post any comments if you have found yourself in a similar situation but resolved it differently.